What is the fire hose? 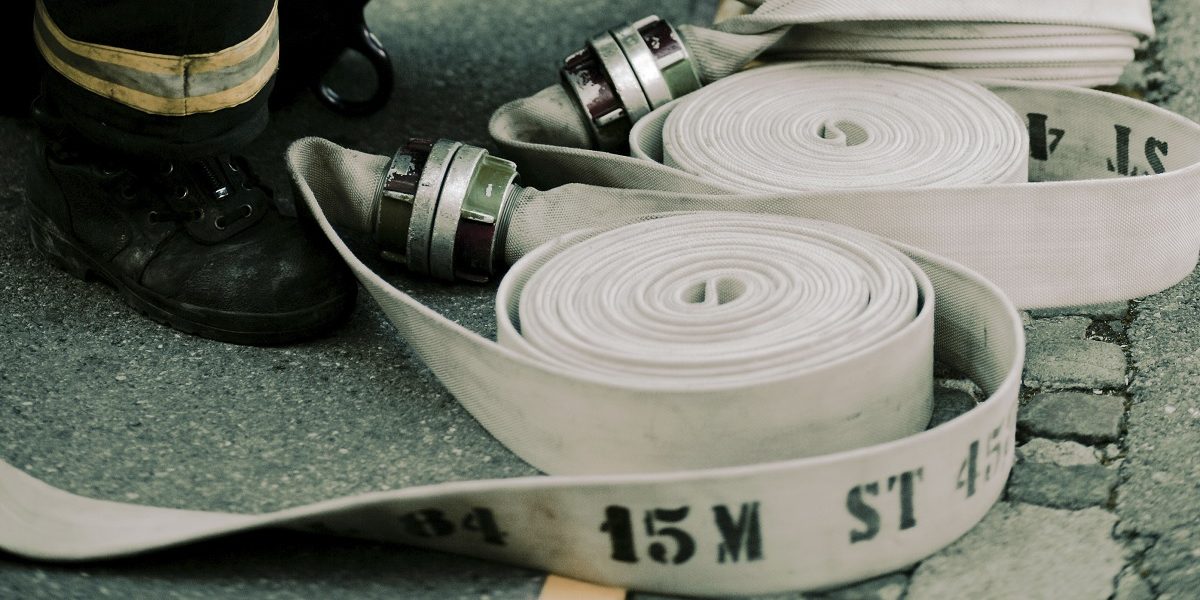 Before talking about how the fire hose is invented, we probably need to know how our ancestors put out the fire thousands of years ago. It is assumed that humans knew naturally how to put out a fire as soon as they created it.

Long before the days when conduits and pipes were invented, water was basically carried by hand to put out fires, but only small ones, such as cooking fires.

Our ancestors soon realized that they needed something like a vessel to carry more water when putting out bigger fires. Therefore, such realization gave birth to the ox-gut bags, literally bags made from ox gut, dating from 400 B.C., which are considered the earliest firefighting tools. People just stomped on the bags filled with water so that, hopefully, the stream blast out of the bag would put out the fire.

This was what really happened in ancient Greece, where people attached one end of an ox’s intestine to a bladder filled with water. `The water in the bladder, when pressed, would flow through the long ox gut and was directed “to high places exposed to fiery darts” as described by the Greek author Apollodorus.

The first so-called “fire hose” is believed to be invented by Jan van der Heyden, a Dutch Baroque-era painter, glass painter, draughtsman and printmaker, under the assistance of his son around 1673. These leather-sewn tubes were 50 feet in length and have become the standard length ever since.

Such a distance between firefighters and the fire is optimal for them to direct the stream to the fire at close range more precisely and effectively.

Not surprisingly, Jan van der Heyden wrote a monumental book entitled Brandspuitenboek, literally meaning “Firehose Book”, which contains a fire report submitted to the city of Amsterdam in 1690. It is considered the pioneering writing in the firefighting history because large numbers of fires in Amsterdam since 1651 were well documented in this report.

Back in the early nineteenth century when hydrants, tanks, and cisterns were commonly used for firefighting, and nozzles at the time were the key to improving water flow. All fire hoses then had the problem of leaking and dripping water because the leather seams always leaked, and the leather couldn’t prevent itself from seeping water over time. Worse still, the hose burst due to overpressure caused by the pump action tankers.

The leaking problem of the hose was sort of solved when rivets were used to firmly fasten the thickest part (or rear quarters) of the cowhide. You can have your cake and eat it, too. Rivets made the hoses much heavier and triggered an increase in workload for firefighters.

For example, a 40-50 ft hose could weigh up to 85 pounds. The average fire pumper today can carry a 1,200 ft (366 m) of 2.5 in (64 mm) diameter rubber-lined hose in a space no larger than a king-size bed. That could be a much greater burden on firefighters who were dealing with the natural leather hoses. The maintenance work was another headache for fire crews, who must treat leather hoses with fish or whale oil regularly to preserve them.

After decades of improvement, the fire hose became “modern” or what it looks like now. Its jackets are polyester woven yarn resistant to mold, mildew, and abrasion.

Searching for MAFCO’s Equipment To Suit Your Fire Hose ?

Three must-knows on Fire Hose Nozzles for Every Firefighters
May 27, 2022

Everything you need to know about Storz couplings
January 21, 2022