What is a Storz Coupling and How Does It Work?

What is a Storz Coupling and How Does It Work?

The Storz coupling is a type of standardized fittings connecting fire hoses, especially large diameter ones, to fire hydrants, pumps, and the inlets so that water can be supplied to fire sprinklers or standpipe systems. It is important for those who are interested in firefighting products to know more about Storz connection. Here we go.

In 1882, Carl August Guido Storz invented a type of hose coupling to connect large diameter hoses to a fire sprinkler or standpipe system. This invention then was called Storz connection and soon became a popular firefighting product throughout Europe before entering the US market almost a century later.

Plus, threaded couplings’ types and standards need to vary widely to fit standpipes, sprinkler systems, or fire hydrants of different specifications among cities or even buildings. Sometimes firefighters need to use adapters to save time when mismatch happens at fire scenes.

Storz connections are standardized couplings that can be used everywhere. For example, a 5-inch Storz coupling can connect to all the 5-inch Storz fittings perfectly, enabling a fast link-up between fire hoses and fire hydrants or fire department connections.

It is the special hooks on each opposing coupling that make the Storz tick. When pressed together, these hooks insert into each other’s flange slot. The latches will then be engaged by rotating the couplings in opposite directions a quarter turn until they are tight enough to form a water-proof seal caused by the gasket. 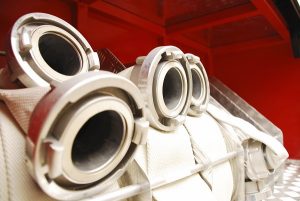 The Storz connection can be uncoupled easily by turning the couplings in opposite directions to release the latches until the couplings separate when the hooks and the slots are parallel to each other.

Thus, pressurized water from fire engines can be fed into standpipe or fire sprinkler systems in the building. Or they serve as optional water supply when regular water sources cannot be found or inoperable.

All these must be done with an accessible existing Storz coupling outside the building or on a fire hydrant.