The Role of the Angle hose valve in the System

The Role of the Angle hose valve in the System

Now in this article, we would like to take a closer look at a special kind of valve called angle hose valve, which is different from the general-purpose valves. Not only that, we will further discuss these specific valves construction, manufacturing standards, and their various application suitability, especially at fire scenes.

Functionally, the angle hose valve is simply a device that looks like the combination of a pipe elbow and a valve. These valves are designed to be used with a fire hose rack assembly, and most of them are angle-pattern globe valves that can govern water 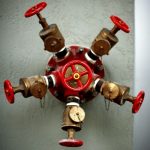 movement by controlling the path of flow with a plug or disc.

Noticeably, angle hose valves are a type of those globe valves most commonly used for throttling applications — especially effectively restricting the water flow. Other globe valves, including gate valves, perform as well as angle hose valves when they are fully opened or closed, but do not have the desired precision to control water flows at a lower rate in an effective way.

Not surprisingly, such a all or nothing performance is commonly found in all types of glove valves, except of angle hose valves. Some ball valves can only squeeze out 10% of the water capacity when it should be more than one-third, or 30% when it should be two-thirds, based on the extent to which these valves are opened.

This fatal flaw of lower-than-expected water flow is caused by an angle that reduces the pressure of the water moving through it. Angle hose valves cleverly avoid this disadvantage by replacing the T-pattern design with an elbow to fix the problems of pressure drops and flow resistance. Meanwhile, such a small design change largely simplifies the fitting process and therefore reduces labor costs as well.

Valves normally are classified based on the guidelines issued by the American Society of Mechanical Engineers (ASME), which is a 120 thousand-member professional standards organization specializing in technical, educational, and research issues of the engineering and technology community.

According to ASME standards, manufacturers use the term Class along with a three/four-digit number to describe the specifications of their valves. Typically, these classes are regarded as ANSI Class ratings, dating from the standards established by the American National Institute (ANSI). The maximum allowable working pressures for valves at given temperatures are determined by these classes. An ASME-certified valve’s parts or components, ranging from the body to inserts, are suitable for use at the temperatures and pressures listed by ANSI standards.

In addition to ASME, the Manufacturers Standardization Society of the Valves and Fittings Industry, aka MSS, has high regard for classifying valves by types and construction. For example, general-purpose brass valves are required by specific MSS standards “MSS SP-80” while angle hose valves, along with valves made from gray iron, need to meet the requirements of MSS SP-85. In other words, the aforementioned standards govern not only the material and dimensions of a valve, but also its other characteristics when operating at desired temperatures and pressures on fire scenes.