How to inspect and maintain a fire hydrant?

How to inspect and maintain a fire hydrant

Before talking about how to inspect and maintain a fire hydrant, we can picture a scenario not uncommonly seen or heard of. An office building is on fire because of an electrical malfunction, and the fire department rushes to the building with the siren wailing. When the firefighters swiftly locate the fire hydrant and connect their hose to it, only to find that there is no water coming out. What a day! 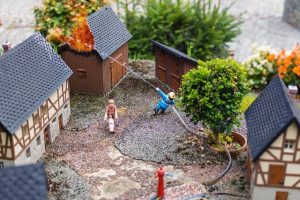 Obviously, fire hydrant maintenance is neglected in the scenario or the real situations, which is typically a matter of life and death. Regular maintenance of fire hydrants is highly related to how well the hydrants operate. Let us first take a look at the fire hydrant operation as described below.

To provide water consistent and powerful enough to put out a fire, fire hydrants must be operated properly. By this we mean a hydrant wrench should always be used to operate a fire hydrant because frequent use of a pipe wrench will round off the five-sided operating nut, thus making a hydrant wrench not useful anymore.

Give the hydrant valve a few turns counterclockwise slowly, after the highest port is opened, until water reaches the open port. All debris and tiny dust in the fire hydrant barrel, if any, should be flushed out by clean water. Wait until the water is clear and slowly open the hydrant to FULL OPEN.

In so doing, the air trapped in the hydrant barrel can be expelled out of it completely. It is commonly known that the problems caused by compressed air (water is not compressible) or attached debris in the barrel will lead to the malfunction of the internal hydrant valve.

An operating hand valve should always be attached to the port where water flows out because it can be used as an alternative to the operating nut when it fails to shut down the water flow form the fire hydrant. Once the control valve is closed, the fire hydrant is shut down completely for the service team to do its repair/maintenance work.

As regards effective fire protection, fire hydrants’s operability and capability play crucial roles, whose success depends on systematic maintenance and regular inspection. Preventive repair and preplacement can always be scheduled to fix the problems before it is too late.

Inspection results should be recorded in writing with problems found being reported as soon as possible. Here are the guidelines on how to maintain a fire hydrant properly: