How To Arrange Hose Line To Reduce The Reaction Force Of Fire Hose Nozzles?

How to arrange hose line to reduce the reaction force of fire hose nozzles?

You might feel bored as a high school student when you tried hard to understand Newton third law: For every action, there is an equal and opposite reaction.

This statement simply means that in every interaction between two objects, there is a pair of forces acting on them. The size of the forces on the first object equals that on the second object.

For every firefighter working the hose lines, this golden rule becomes the first lesson to take because when they turn on a hose, it moves backward in the opposite direction to the water coming out of the fire hose nozzle. The reason why the hose moves backward is that it is pushed backward by a reaction force when the water is forced out of the hose. 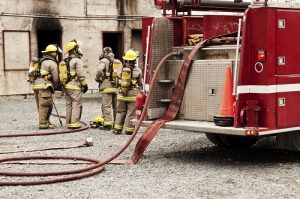 This phenomenon can also be explained by the principle of conservation of momentum if you really want to know the truth. Knowing how such backward force works enables firefighters to properly operate hose lines by effectively reducing the reaction of fire hose nozzles

Put in a nutshell, momentum is not conserved when a system is influenced by the outside force just like firefighters holding the hose to keep it from moving backward as a reaction force against the forward momentum brought about by water.

Firefighters pull fire hose line (2 ½ inch) to put out structural fires that normally needs larger handlines and greater amounts of water. Most fire trucks are equipped with pre-connected hose lines of the sizes ranging from 1 ½ inch, 1 ¾ inch to 2 ½ inch (from about 150 to 200 feet in length), which could handle most fire situations most of the time but not always. Larger host lines that can deliver larger volume of water.